2018 Trial
Avg Spelling Improvement
10.5 Months
Length of Intervention
3 Months
Research Design
One group pre-test/post-test study
Age Range
Y4 - Y9 (8 - 14 year olds)
Inclusion Criteria
Pupils were all identified by their SENCO as having a spelling age of at least 12 months behind their chronological age
Results
On average pupils’ spelling age improved by 10.5 months over the 3-month period.

Spelling Tutor is an online literacy intervention for pupils aged 6 years to assist with spelling. It uses spaced repetition to ensure spellings are stored in the long-term memory and easy to recall.

Pupils use a combination of reading, writing and typing to practice the spelling.

In this evaluation, the intervention was intended to be delivered through 10-minute sessions every day over a period of 3 months from KS2. Pupils were identified by their SENCO as being as having a reading age of at 12 months behind the chronological age.

It measured the impact of the study in spelling age. While not a dyslexia specific program, the research was designed to look at the impact on pupils at least 12 months behind in reading.

Pupils whose starting and ending spelling age was 5 years were removed from the results as it was not possible to ascertain progress made. The study was funded by Dyslexia Gold as part of a wider study into the impact of their three programs; Engaging Eyes, Fluency Builder and Spelling Tutor.

83% of pupils made progress. Of those that did make progress, the RG was significant given the short trial period and reduced number of interventions.

Around 4 weeks into the trial, the program received an update. This confirms pupils can spell the words they have marked as correct. Pupils that made progress had an average RG of 4.5. This equates to learning all the KS2 words in approximately 1 year of intervention.

Improvement in Spelling Age after Playing for 3 Months 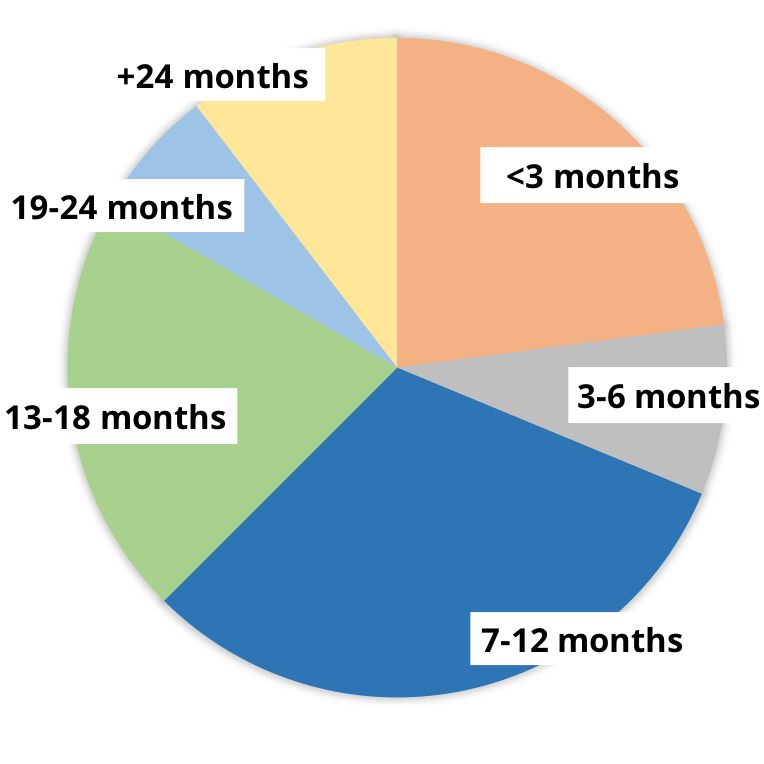 How secure is this finding?

The analysis was carried out over a sample of pupils in KS2. There was no control group to compare the data. 66 pupils, from 7 schools were identified to take part in the trial, with 50 completing it. Data was used by those pupils who had a quantifiable spelling age.

The trial asked for pupils to play every school day for 3 months. On average pupils completed 25 sessions.

The feedback from schools was positive. All these pupils had regular attendance, and none were in the early stages of English Acquisition. They were all significantly behind in reading despite the schools’ best efforts including catch up interventions.

Pupils' reading ages were assessed using the Vernon Spelling Test at the start and end of the trial.

Spelling Tutor is an online for pupils from the age of 6 upwards who are struggling with spelling. The intervention focuses on spaced repetition, writing and pupil ownership of learning.

The intervention is in two parts and lasts for 10 minutes. It requires minimal input from teaching staff.

The computer reads a sentence to the pupil, with the words on the screen. The pupil is then asked to write out that sentence (it is removed from the screen). The pupil then marks their spelling and grammar.

At the end of the session, the pupil is asked to type up to 10 words that they have marked correctly. This checks the spellings. Spelling Tutor works by an algorithm that spaces out words pupils have spelt incorrectly. These words will be repeated at calculated intervals to check the spelling knowledge.

The notion that spaced repetition could be used for improving learning was first proposed in the book Psychology of Study by Prof. C. A. Mace1 in 1932: "Perhaps the most important discoveries are those which relate to the appropriate distribution of the periods of study...Acts of revision should be spaced in gradually increasing intervals, roughly intervals of one day, two days, four days, eight days, and so on."

Since the development of computers, spaced repetition has been an accepted method of learning and recalling information.

The primary research question was to identify the impact of Spelling Tutor intervention on the spelling ability of individual pupils over a 3-month intervention period. Pupils selected for the intervention start receiving the intervention after the Easter break. Their spelling age was assessed at the start of the trial. Pupils' literacy skills were measured by performance on the Vernon Spelling Test.

This was a multicentre trial within schools in England. The trial was designed to involve 7 schools, 2 of which were KS3. The trial was introduced to the school by the SENCO who worked with teaching staff to explain how Spelling Tutor worked and to set up the pupils on the system. Initially 100 pupils were registered to play Spelling Tutor.

Spelling Tutor is an online program for learners aged 6 plus who are struggling to spell. The intervention requires very little teaching support. It targets those pupils who are behind in spelling by at least 12 months.

Pupils are required to play Spelling Tutor most school days. It is an interactive intervention to requiring pupils to write and take ownership of their progress.

The computer program matches the level of spelling to the individual pupil and works at their speed, repeating words they have spelled incorrectly over a period of weeks, with increasing time.

The outcome was spelling ability, and this was measured using the Vernon Spelling Test.

The tests were administered and marked by the school and the data shared with Dyslexia Gold.

7 schools were chosen to participate in the trial with a total of 100 pupils registered to take part. At the end of the trial, data was only used for those pupils who had a spelling age above 5. This resulted in 52 pupils.

The aim of the analysis is to assess whether the Spelling Tutor intervention has had any significant impact on pupils' spelling, as measured by the post-intervention test scores.

The primary analysis examined the impact on spelling age and looked at gender and English as an additional language.

The average Ratio Gain using the Spelling Age improvement for the 3-month period was 3.6.

English as an Additional Language

Improvements were seen across those pupils who have English as a Second Language. An average of 16.5 months progress was seen for these pupils. This gives a ratio gain of 5.5 for 3 months with a range of 12 months and 21 months progress.

Spelling Tutor performed well with those in KS3, with an average ratio gain of 2.64 and a range of -15 months to 9.33. It was received well by these pupils.

Spelling Tutor is a low-cost intervention requiring minimal teaching support. Pupils enjoy the interaction aspect of the intervention and the requirement to mark their own work.

Progress is linked to the number of times played and, as with all interventions, commitment is needed from the school to run the intervention on a daily basis to make the quickest progress.

An RG of 4 is achievable over 3 months and boys respond to the intervention slightly better than girls. It is suitable as an intervention for English as a Second language.