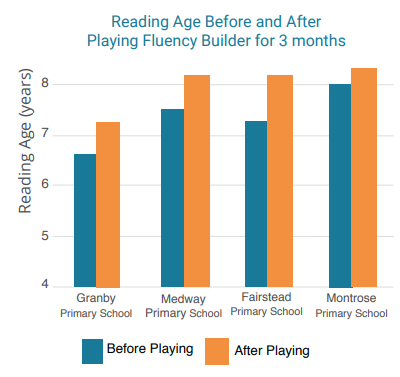 Fluency Builder is an online literacy intervention for pupils aged 6 years and up who are struggling to learn to read or to read fluently. If focuses on difficulties with phonological awareness experienced by these pupils; the ability to hear the individual sounds in words and quickly recall the sounds for letter shapes. The intervention uses sound-based activities to exercise and strengthen connections within the brain used for reading. It requires minimal supervision by teaching staff.

In this evaluation, the intervention was intended to be delivered through 10-minute sessions every day over a period of 3 months with pupils from KS2. Pupils were identified by their SENCO as having a reading age of at least 12 months behind their chronological age.

It measured the impact of the study on reading age.

The study was funded by Dyslexia Gold as part of a wider study into the impact of their three programs; Engaging Eyes, Fluency Builder and Spelling Tutor.

75% of pupils made progress. The RG was significant especially as none of the pupils completed the full 50 lessons.

Improvement in Reading Age after Playing for 3 Months "Their results were really good, we are so impressed! How do we subscribe?"

How secure is this finding?

The analysis was carried out over a small sample of pupils in KS2. There was no control group to compare the data. 42 pupils, from 4 schools were identified to take part in the trial, with 41 completing it. 1 pupil was excluded as he was unable to complete the reading age test.

The trial asked for pupils to play every school day for 3 months. On average, pupils completed 28 sessions.

The feedback from schools was positive. All these pupils had regular attendance, and none were in the early stages of English Acquisition. They were all significantly behind in reading despite the schools’ best efforts including catch up literacy interventions.

Fluency Builder is an online intervention for pupils from the age of 6 upwards who are struggling to learn to read or read fluently. The intervention focuses on phonological awareness and phoneme manipulation. Regular use of the program strengthens the neurological paths between the Parieto-temporal area of the brain to the Occipito-temporal.

The intervention is lasts for 10-20 minutes. Each session focuses on grapheme to phoneme correspondence. The program contains 10 – 15 activities each day which cover phonological awareness, reading fluency, phoneme manipulation and phonics.

Concentrating on auditory differences, pupils are asked to manipulate words and letters. These activities develop their phonological awareness, teaching skills not gained in Early Years education. Plenty of repetition is included in the program. Each phoneme to grapheme correspondence is repeated in at least 4 sessions.

Additionally, using non-fiction text that is engaging and appropriate to their reading ability, pupils are asked to read aloud a piece of text. The computer will read any word they do not know. Each passage is read aloud 4 times, twice the first day and twice the next.

The program is suitable for pupils aged 6 to 11.

The link between brain function and dyslexia was first discussed in 1896 by W Pringle Morgan, calling it word blindness. He noted that intelligence was not linked to the ability to read.

Over the years, significant research has been made into dyslexia looking at visual impairment (see our research under Engaging Eyes) and the ability to ‘hear and distinguish’ the letter sounds, phonological awareness and to be able to manipulate phonemes.

In 1994, Torgeson, Wagner and Rashotte carried out research looking at phonological processing and reading. Drawing on previous research, they defined phonological awareness as ‘one’s sensitivity to, or explicit awareness of, the phonological structure of the words in one’s language.’ The research went on to demonstrate the correlation between those pupils who were behind in phonological awareness in grade 1 stayed behind during the course of their schooling.

Research by Sally Shaywitz MD looked at what is actually happening in the brain while reading, using MRI scans to provide a visual picture. When beginning to read, pupils use the front part of their brain, Broca’s area. Used for speech and word analysis, they quickly move to the rear area, the Parieto-tempora. Heard words are de-coded, broken down using phonological awareness and phoneme manipulation. Over time, words are stored in the Occipito-tempora, a memory area allowing for words to be recalled quickly based on their shape.

Fluency Builder works by practicing and therefore strengthening these pathways. Using repetition and movement (drag and drop), the pathways are stimulated. Overtime, pupils are able to recall words rather than decode. It’s at this point that comprehension improves, they move from concentrating on ‘reading’ towards understanding the meaning behind the words.

The primary research question was to identify the impact of Fluency Builder intervention on the reading ability of individual pupils over a 3-month intervention period. Pupils selected for the intervention start receiving the intervention after the Easter break. Their reading age was assessed at the start of the trial and at the end, along with their reading speed. Pupils' literacy skills were measured by performance on the New Salford Reading Test.

This was a multicentre trial within schools in England. The trial was designed to involve 4 schools (all KS2). The trial was introduced to the school by the SENCO who worked with teaching staff to explain how Fluency Builder worked and to set up the pupils on the system.

Fluency Builder is an online program for learners aged 6 plus who are struggling to read or to read fluently. The intervention requires very little teaching support.

Pupils are required to play Fluency Builder most school days.

The outcome was reading ability, and this was measured using the New Salford Reading Test. This test was selected as it is a reliable test of literacy with a Form A and Form B.

The tests were administered and marked by the school and the data shared with Dyslexia Gold.

4 schools were chosen to participate in the trial with a total of 41 pupils registered to take part. At the end of the trial, all pupil data was used, irrelevant of the number of times they had played Fluency Builder, with the exception of 1 pupil who was unable to take the reading test.

The aim of the analysis is to assess whether the intervention has had any significant impact on pupils' literacy, as measured by the post-intervention test scores.

The average Ratio Gain using the Reading Age improvement for the 3-month period was 2.5. The range was between -5 months and 31 months.

English as an Additional Language

Improvements were seen across those pupils who have English as an Additional Language. An average of 7.9 months progress was seen for these pupils. This gives a ratio gain of 2.5.

Fluency Builder is a low-cost intervention requiring minimal teaching support. Pupils enjoy the interactive aspect of the intervention and look forward to playing.

Progress through the various phonics and phonemes is linked to the number of times played and, as with all interventions, commitment is needed from the school to run the intervention on a daily basis to make the quickest progress.

An RG of 2.5 is achievable over 3 months. It is suitable as an intervention for English as a Second language.